Now I want to make some amulets...

I did a piece as a final project for a class where the assignment was to create an entry for this illustration contest.  The only requirement for the contest was that the starting point for our work had to be the Amulets and Charms collection at the Pitt Rivers Museum in Oxford.  (And also that it not have human remains in it, skulls and shrunken heads and such.  I hope fowl remains are okay.)

From what I saw (online) they seem to have a lot of neat stuff, particularly things that I would probably never have thought of as amulets what with my largely Western-European-based fantasy cultural knowledge.  Just looking through the intro page was fascinating, as there were short descriptions of amulets and how they were used in their respective cultures.  (I love cultures!  I love reading anthropological books. Sometimes my favorite parts of fantasy books are the establishing descriptions where they give you an overview of the social background of the kingdom or whatever even before the plot gets going.)

I like the idea of found charms, and item like a stone or a shell or an herb that gives off a particular quality.  But as I read more I got really into the idea of physically creating a charm, working material with your own hands to form it and at the same time imbuing it with some kind of power.  I had this image in my head of someone molding metal into certain shapes and at the same time seeing this supernatural energy that is gathered into it and held within the shapes.  (This probably stems from extensive reading of Tamora Pierce books, I will freely admit.)  Then I started wondering what a character would be like who could sculpt with both metal and magic in such a way.  Eventually out of that came this roughened old amulet repairman, not a magician as such, but someone who knows how to work the magic just enough to fix these charms up and get them running again. 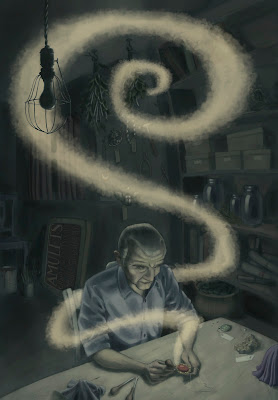 I did a pencil drawing on paper, then scanned it into Photoshop and painted it monochromatically.  (Well almost, from dark green to light yellow.)  Afterwards I added color in some places on a multiply layer.  I'd never worked that way before, but it ended up being really good for me, because I could concentrate on form and shading without having to worry about color at all.  It helped me to get a good relationship between lights and darks throughout the piece, as well as to get a more painterly quality even though it was mostly digital.  I think I'm pretty happy with the final result, although I wish you got a better view of the bird skeleton...
Posted by Emily Hurst Pritchett at 9:19 PM No comments: